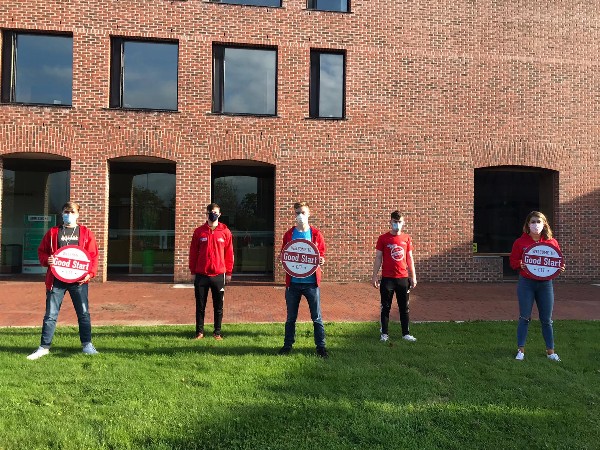 Registration week. Hopefully, the first of your many weeks at CIT. It’s bound to be nerve-wracking for most if not all people. I know it was for me, at least. I remember arriving at CIT for the first time as a student and not knowing where to go, who to talk to, or even really what I was meant to be doing there. But eventually, I found my way to the student center, with some helpful guidance from a friendly Good Start Ambassador, where I was kindly shuffled into a waiting area filled with my soon-to-be peers. I distinctly remember looking around, not recognizing a single soul, and wondering if the person next to me would be in my course. If we would get the chance to talk and maybe be friends. She wasn’t. We did later become friends through taking some of the same classes but I didn’t meet anyone from my course for another hour or so.

I do remember feeling anxious in that line. Waiting for my name to be called. None of my friends from school around me. Surrounded by about a hundred people I had never seen before as I filled out forms and got my picture taken. And after all that, I was shuttled into a massive room, even more people around me now. I was more than a little terrified, to say the least but we soon started playing some icebreaker games.

Now, to be honest, I was not particularly happy about this. I’d played these types of games before in school, summer camps, etc and they had never really done anything meaningful. They had only ever given me a general sketch of who I might maybe want to talk to. Sure, I'd learn some random facts about someone, but really, I figured that knowing that you’ve actually lived in 5 different counties wasn’t going to help me decide if I wanted to talk to you more than once. Which is why I was glad I didn’t have to encounter such a situation during my registration week. Instead, we played interactive games. It wasn’t something you could zone out of if you wanted to. You had to engage your whole body and I really liked that. I was actually having fun. And before I knew it, I was more focused on trying to figure out Dylan’s lie was in a high-stakes game of “2 Truths, 1 Lie” to be worried or nervous about anything.

You might be rightly thinking that this is all redundant. That there’s no real point in my telling you all this because my registration week and yours are likely to be so different that you could hardly call them the same thing. Instead of standing in a circle, decidedly not 2 meters apart from each other, most of these ice-breaker games will instead be carried out online, in front of a wall of faces on Zoom as you desperately try to orient your camera at such an angle that you’re something resembling comfortable. I won’t lie to you. That is kind of terrifying. I know it is because I had to go through four weeks of it for 6 hours a day for this very job. I was dying with nerves the first day. The impenetrable fortress of Zoom stared back at me and I felt like everyone could see my every flaw and insecurity. This wasn’t helped by having to also look at my rapidly perspiring face the whole time, which quickly became a vicious cycle that the mere thought of makes me feel a little hot under the collar.

I had convinced myself that I would be like this forever. That I would never be comfortable in this job, would never make friends and would be fired as soon as I was exposed for the apparent fraud I was. But look at me now. Writing this very blog you’re reading. Which means we can gather a couple of things, can’t we? Namely, that I was not, in fact, kicked out of CIT and the fact that I have apparently been comfortable enough to crack bad jokes this whole time, we can figure out that at some point, my stomach stopped trying to eat itself from the inside out.

“Okay, but why though?” I hear you ask. A valid question to be sure. Why is it that I’m telling you all about my registration week and why is that you have to read about my nerves in writing this all for you? Well, it’s because I've been there too. I’ve been in that spot where I was nervous, and scared and terrified outside of my mind. I didn’t want to do it. I even thought about dropping out my first week. Not because I didn’t like the course or the people but because I didn’t want to deal with that weight in my stomach anymore. But I did. I grit my teeth and bore it. It wasn’t fun and it wasn’t easy, but I got through it.

Everyone gets nervous before they start something big. Be it a job or college or anything else that’s going to mark a new chapter in your life. It’s normal to feel that way. But it’s really important that you remember a couple of key things when you do feel that way. 1) That everyone else around you is probably just as terrified as you are, if not more. 2) You’re where you belong. You’ve done all the hard work. Getting into CIT isn’t easy, it’s something to be commended. You should be proud of all the work that led you here. 3) You’re stronger than you think. You might not be able to remember a time when you felt like this before but it’s important that you remember you’re strong enough to take it. This feeling will pass. You’ll get through that sense of fear. What was daunting before will become trivial and then you get to move onto something bigger and better again, which will be just as hard, but even then, I'm sure you'll surprise yourself and come out on top.